Archive for the category “1” 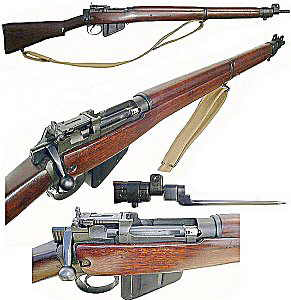 Prior to World War I, the Rifle, Short, Magazine Lee-Enfield, or SMLE, was developed to provide a single rifle to offer a compromise length between rifles and carbines, and to incorporate improvements deemed necessary from experience in the Boer War. With a length of 44.5 inches (1,130 mm), the new weapon was referred to as a “short rifle”; the word “short” refers to the length of the rifle, not the length of the magazine. From 1903 to 1909, many Metford and Enfield rifles were converted to the SMLE configuration with shorter barrels and modified furniture. Production of the improved SMLE Mk III began in 1907. Earlier Mk I and Mk II rifles were upgraded to include several of the improvements of the Mk III. The compromise length was consistent with military trends as the US Springfield M1903 was only produced in the compromise length and the Germans adopted the kurz (short) rifle concept between the world wars for the Mauser 98k (model 1898 short).

“Lee-Enfield 1907. Rivalling the Mauser both in terms of use and reputation was the British Lee-Enfield 0.303-inch rifle, which was issued to virtually all British soldiers on the Western Front (and many elsewhere). First produced in 1907 and officially titled the Short Magazine Lee-Enfield (SMLE) Mark III, the name was derived from its designer (James Lee, an American) and its manufacturer (the Royal Small Arms Factory based in Enfield, London).

Unlike the Mauser the Lee-Enfield, with its ten-cartridge magazine, was well suited to rapid fire; a suitably trained soldier could expect to fire twelve well-aimed shots a minute.

The Lee-Enfield proved so sturdy and reliable that its use continued into World War Two. Its design was also incorporated into both U.S. and Canadian models.”

From: Over the top, by and American Soldier who went, by Arthur Guy Empey.

“After arriving at this place, I was hustled to the quartermaster stores and received an awful shock. The Quartermaster Sergeant spread a
waterproof sheet on the ground, and commenced throwing a miscellaneous assortment of straps, buckles, and other paraphernalia into it. I thought he would never stop, but when the pile reached to my knees he paused long enough to say, ”Next, No. 5217, ‘Arris, ‘B’ Company.” I gazed in bewilderment at the pile of junk in front of me, and then my eyes wandered around looking for the wagon which was to carry it to the barracks. I was rudely brought to earth by the ”Quarter’ exclaiming, ‘”Ere, you, ‘op it, tyke it aw’y; blind my eyes, ‘e*s looking for ‘is batman to *elp ‘im carry it.’

Struggling under the load, with frequent pauses for rest, I reached our barracks (large car barns), and my platoon leader came to the rescue. It was a marvel to me how quickly he assembled the equipment. After he had completed the task, he showed me how to adjust it on my person. Pretty soon I stood before him a proper Tommy Atkins in heavy marching order, feeling like an overloaded camel.

On my feet were heavy-soled boots, studded with hobnails, the toes and heels of which were reinforced by steel half-moons. My legs were encased in woolen puttees, olive drab in color, with my trousers overlapping them at the top. Then a woolen khaki tunic, under which was a bluish-gray woolen shirt, minus a collar, beneath this shirt a woolen belly-band about six inches wide, held in place by tie strings of white tape. On my head was a heavy woolen trench cap, with huge ear laps buttoned over the top. Then the equipment: A canvas belt, with ammunition pockets, and two wide canvas straps like suspenders, called “D” straps, fastened to the belt in front, passing over each shoulder, crossing in the middle of my back, and attached by buckles to the rear of the belt. On the right side of the belt hung a water bottle, covered with felt; on the left side was my bayonet and scabbard, and entrenching tool handle, this handle strapped to the bayonet scabbard. In the rear was my entrenching tool, carried in a canvas case. This tool was a combination pick and spade. A canvas haversack was strapped to the left side of the belt, while on my back was the pack, also of canvas, held in place by two canvas straps over the shoulders; suspended on the bottom of the pack was my mess tin or canteen in a neat little canvas case. My waterproof sheet, looking like a jelly roll, was strapped on top of the pack, with a wooden stick for cleaning the breach of the rifle projecting from each end. On a lanyard around my waist hung a huge jackknife with a can-opener attachment. The pack contained my overcoat, an extra pair of socks, change of underwear, hold-all (containing knife, fork, spoon, comb, toothbrush, lather brush, shaving soap, and a razor made of tin, with “Made in England” stamped on the blade; when trying to shave with this it made you wish that you were at war with Patagonia, so that you could have a ‘hollow ground” stamped “Made in Germany”; then your housewife, button-cleaning outfit, consisting of a brass button stick, two stiff brushes, and a box of “Soldiers’ Friend” paste; then a shoe brush and a box of dubbin, a writing pad, indelible pencil, envelopes, and pay book, and personal belongings, such as a small mirror, a decent razor, and a sheaf of unanswered letters, and fags. In your haversack you carry your iron rations, meaning a tin of bully beef, four biscuits, and a can containing tea, sugar, and Oxo cubes; a couple of pipes and a package of shag, a tin of rifle oil, and a pull-through. Tommy generally carries the oil with his rations; it gives the cheese a sort of sardine taste.

Add to this a first-aid pouch and a long ungainly rifle patterned after the Daniel Boone period,and you have an idea of a British soldier in Blighty.

Before leaving for France, this rifle is taken from him and he is issued with a Lee-Enfield short trench rifle and a ration bag.

In France he receives two gas helmets, a. sheepskin coat, rubber mackintosh,- steel helmet, two blankets, tear-shell goggles, a balaclava helmet, gloves, and a tin of anti-frostbite grease which is
excellent for greasing the boots. Add to this the weight of his rations, and can you blame Tommy for growling at a twenty kilo route march? ”

Battn detrained at BERGUETTE at 3.30pm and 5pm. Marched to billets NW of MERVILLE at K21. Remainder of Brigade 2/4 OXFORD AND BUCKS LI, 2/5 GLOSTER Regt, and 2/1 BUCKS Battn billeted in adjoining areas within 1 mile.

Morning bathing parade. Battn entrained in 2 trains at HAVRE at 3.30 and 5pm and spent night of 27-28 May on train.