Archive for the tag “Getting Touch” 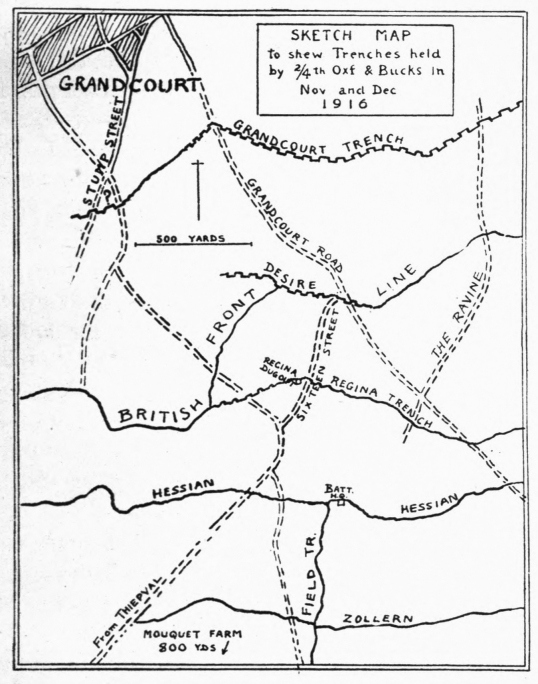 From The Story of the 2/4th Oxfordshire and Buckinghamshire Light Infantry, by Captain G. K. Rose M.C. (Oxford: B.H. Blackwell, 1920)

On Christmas Eve, 1916, the Battalion relieved the front line. Brown and Davenport took their companies to Desire and Regina. Battalion Headquarters had an improved position at Zollern Redoubt, and their old dug-out in Hessian was left to D Company Headquarters. Robinson with C Company was also in Hessian, to the left of D. His headquarters possessed plenty of depth but neither height nor breadth. The dug-out entrance was the size of a large letter-box and nearly level with the trench floor.

After the march up, the remainder of the night was devoted to the trying process of ‘getting touch.’ This meant finding the neighbouring sentry-posts on each flank–an important duty, for the Germans usually knew the date and sometimes the hour of our reliefs and the limits of frontage held by different units (we naturally were similarly informed about the enemy). For reasons of security no relief could be held complete before not only our own men were safely in but our flanks were established by touch with neighbouring posts.

In the course of the very relief I have mentioned, a platoon of one battalion reached the front line but remained lost for more than a day. It could neither get touch with others nor others with it. ‘Getting touch’ seemed easy on a map and was often done in statements over the telephone. Tangible relations were more difficult and efforts to obtain them often involved most exasperating situations, for whole nights could be spent meandering in search of positions, which in reality were only a few hundred yards distant. Total absence of guiding landmarks was freely remarked as the most striking characteristic of this part of the Somme area. I refer only to night movement, for by day there were always distant objects to steer by, and the foreground, seemingly a cratered wilderness of mud, to the trained eye wore a multitude of significant objects.

My last topic introduces the regimental guide. Guides performed some of the hardest and most responsible work of the war. Staff work could at time be botched or boggled without ill-effects; for mistakes by guides some heavy penalty was paid. Whenever a relief took place, men to lead up the incoming unit into the positions it was to occupy were sent back, usually one per platoon, or, in cases of difficult relief and when platoon strengths were different, one per sentry-post. Guides rarely received much credit when reliefs went well, but always the blame when they went ill. The private soldiers, who guided our troops into trench and battle, played a greater part in winning the war than any record has ever confessed.